Admission controllers are powerful tools for intercepting requests to the Kubernetes API server prior to persistence of the object. However, they are not very flexible due to the requirement that they are compiled as a binary in the kube-apiserver that is configured by the cluster administrator. Starting in Kubernetes 1.7, Initializers and External Admission Webhooks are introduced to address this limitation. In Kubernetes 1.9, Initializers stays in alpha phase while External Admission Webhooks are promoted to beta and split into MutatingAdmissionWebhook and ValidatingAdmissionWebhook.

In this article, I will dive into the details of a MutatingAdmissionWebhook and write a working webhook admission server step-by-step.

Kubernetes cluster administrators can use webhooks to create additional mutating and validating admission plugins to the admission chain of apiserver without recompiling them. This provides developers with the freedom and flexibility to customize admission logic on multiple actions such CREATE, UPDATE, and DELETE on any resource. The number of applications that can be used are vast. Some common use cases include:

Besides the user-cases listed above, many more applications can be created based on the power of webhooks.

Based on feedback from the community and use cases in alpha phase for both External Admission Webhooks and Initializers, the Kubernetes community decided to promote webhooks to beta and split it into two types of webhooks (MutatingAdmissionWebhook and ValidatingAdmissionWebhook). These updates make webhooks consistent with other admission controllers and enforce mutate-before-validate. Initializers can also implement dynamic admission control by modifying Kubernetes resources before they are actually created. If you’re unfamiliar with Initializers, please refer to the article: https://medium.com/ibm-cloud/kubernetes-initializers-deep-dive-and-tutorial-3bc416e4e13e.

So what’s the difference between Webhooks and Initializers?

Besides the differences listed above, Initializer has some significant issues currently as open issues with long expected development time including quota replenishment bug. Promotion of Webhooks to beta may be a signal that more support for it in the future, but that depends. If stable behavior is preferred, I suggest you choose Webhooks.

The following diagram describes how MutatingAdmissionWebhook works in details: 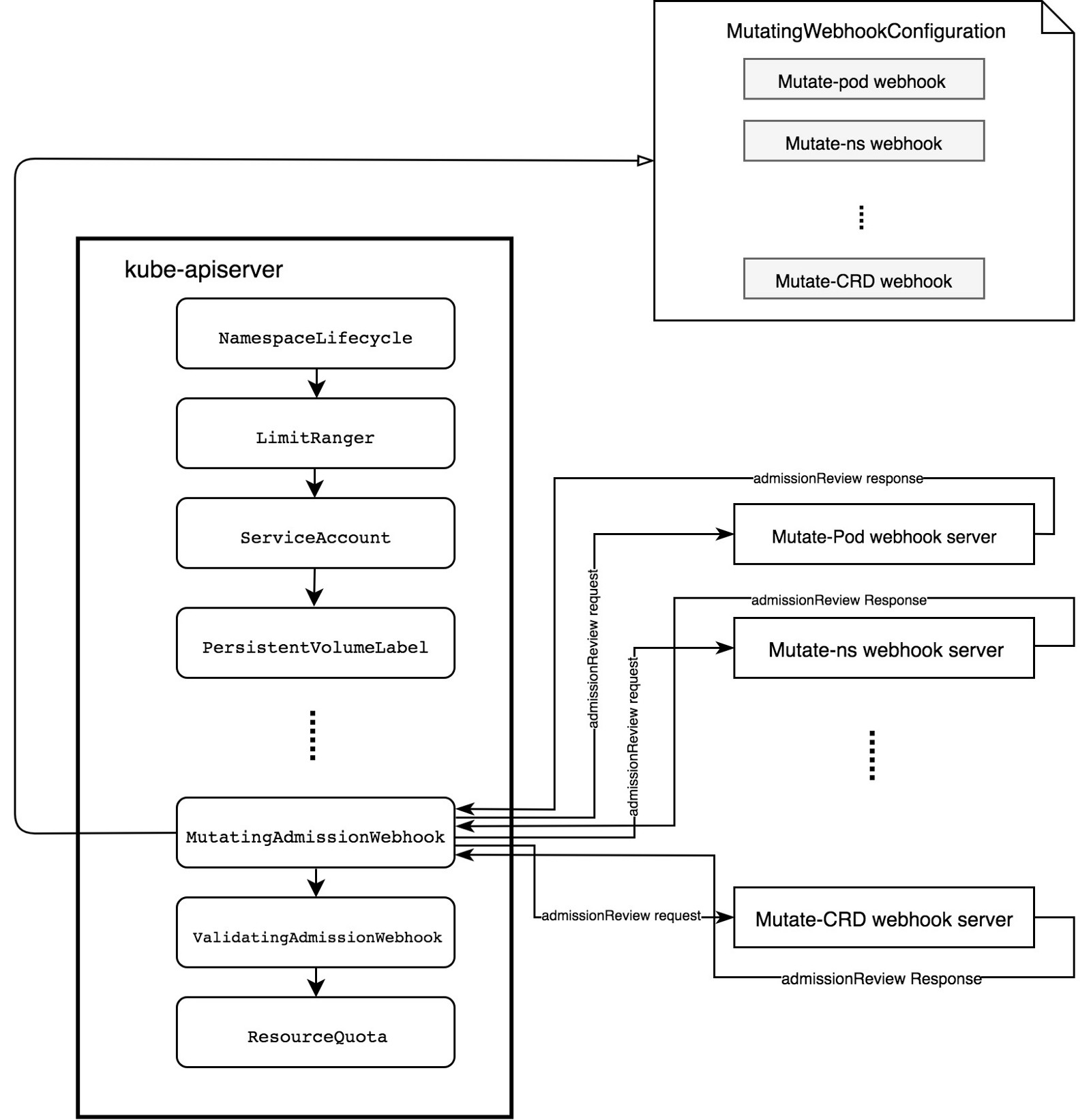 Writing a complete Webhook Admission Server may be intimidating. To make it easier, we’ll write a simple Webhook Admission Server that implements injecting nginx sidecar container and volume. The complete code can be found in the kube-mutating-webhook-tutorial. This project refers to `Kunernetes webhook example](https://github.com/kubernetes/kubernetes/tree/release-1.9/test/images/webhook) and Istio sidecar injection implementation.

In the following sections, I’ll show you how to write a working containerized webhook admission server and deploy it to a Kubernetes cluster.

MutatingAdmissionWebhook requires a Kubernetes 1.9.0 or above with the admissionregistration.k8s.io/v1beta1 API enabled. Verify that by the following command:

The result should not be empty.

Webhook Admission Server is just a simple http server that adheres to the Kubernetes admission API. I’ll paste some pseudo code to describe the main logic:

Explanation for the above code:

Next we’ll focus on the main logic of the handler function serve:

The serve function is a simple http handler with http request and response writer parameters.

For the part of mutate function, you get the free rein to complete it in your preferred way. Let’s take my implementation as an example:

From the code above, the mutate function calls mutationRequired to detemine whether mutation is required or not. For those requiring mutation, the mutate function gets the mutation ‘patch’ from another function createPatch. Pay close attention to the little trick in function mutationRequired, we skip the pods without annotation sidecar-injector-webhook.morven.me/inject: true. That will be mentioned latter when we deployment applications. For complete code, please refer to https://github.com/morvencao/kube-mutating-webhook-tutorial/blob/master/webhook.go.

Create Dockerfile and Build the Container

And create Dockerfile as dependency of build script:

Before actually building the container, you need a Docker account and change the image name&tag(in Dockerfile and deployment.yaml) to yours, then execute:

Now let’s create a Kubernetes ConfigMap, which includes container and volume information that will be injected into the target pod.

From the above manifest, another ConfigMap including nginx conf is required. Here we put it in nginxconfigmap.yaml.

Then deploy the two ConfigMaps to cluster:

Supporting TLS for external webhook server is also required because admission is a high security operation. As part of the process, we need to create a TLS certificate signed by the Kubernetes CA to secure the communication between the webhook server and apiserver. For the complete steps for creating and approving the process for CSR, please refer to https://kubernetes.io/docs/tasks/tls/managing-tls-in-a-cluster/.

For simplicity purposes, we referred to the script from Istio and created a similar script called webhook-create-signed-cert.sh to automatically create the cert/key pair and include it in a Kubernetes secret.

We then execute it and a Kubernetes secret including cert/key pair is created:

The deployment brings up 1 pod in which the sidecar-injector container is running. The container starts with special arguments:

The service exposes the pod defined above labeled by app=sidecar-injector to make it accessible in cluster. This service will be referred by the MutatingWebhookConfiguration in clientConfig section and by default spec.ports.port should be 443(default https port).

Next we deploy the above Deployment and Service to cluster and verify the sidecar injector webhook server is running:

For now, we create the MutatingWebhookConfiguration manifest with the following content:

Line 8: name - name for the webhook, should be fully qualified. Mutiple mutating webhooks are sorted by providing order. Line 9: clientConfig - describes how to connect to the webhook admission server and the TLS certificate. In our case, we specify the sidecar injector service. Line 15: rules - specifies what resources and what actions the webhook server handles. In our case, only intercepts request for creating of pods. Line 20: namespaceSelector - namespaceSelector decides whether to send admission request the webhook server on an object based on whether the namespace for that object matches the selector.

Before deploying the MutatingWebhookConfiguration, we need to replace the ${CA_BUNDLE} with apiserver’s default caBundle. Let’s write the script webhook-patch-ca-bundle.sh to automate this process:

Finally we can deploy MutatingWebhookConfiguration:

Now it’s time to verify sidecar injector works as expected and try to see how to troubleshoot if you encounter issues. Typically we create and deploy a sleep application in default namespace to see if the sidecar can be injected.

Pay close attention to the spec.template.metadata.annotations as there is a new annotation added:

Check the deployment and pod:

It’s not there. What’s going on? Let’s check the sidecar injector logs:

We have configured ‘namespaceSelector’ in MutatingWebhookConfiguration, which means only resources in namespace matching the selector will be sent to webhook server. So we need label the default namespace with sidecar-injector=enabled:

We have now configured the MutatingWebhookConfiguration resulting in the sidecar injection occurring at pod creation time. Kill the running pod and verify a new pod is created with the injected sidecar.

We can see that sidecar container and volume have been injected into sleep application successfully. Until now, we have working sidecar injector with MutatingAdmissionWebhook. With namespaceSelector we can easily control whether the pods in specified namespace will be injected or not.

But there is a problem for this, with the above configurations, all of the pods in default namespace will be injected with a sidecar, this may be not expected for some cases.

Thanks to flexibility of MutatingAdmissionWebhook, we can easily customized the mutating logic to filter resources with specified annotations. Remember the annotation sidecar-injector-webhook.morven.me/inject: "true" mentioned above. It can be used as an extra control on sidecar injector. I have written some code in webhook server to skip injecting for pod without the annotation.

Let’s give it a try. In this case, we create another sleep application without sidecar-injector-webhook.morven.me/inject: "true" annotation in podTemplateSpec:

And then verify the sidecar injector skipped the pod:

The output shows that the sleep application contains only one container, no extra container and volume injected. Then we patch the sleep deployment to add the additional annotation and verify it will be injected after recreated:

MutatingAdmissionWebhook is one of easiest ways of extending Kubernetes with new policy controls and resources mutation and a host of other options.

This feature will enable more workloads and support more ecosystem components, including Istio service mesh platform. Starting with Istio 0.5.0, Istio has been refactored to support their auto injection code with MutatingAdmissionWebhook replacing initializers.

note
tech
About Me